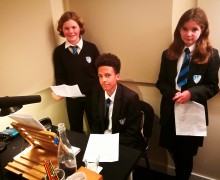 Back in autumn term, the English department announced a Storytelling Competition for all students in Years 7 to 9.

English teachers and senior members of staff got the opportunity to read some beautiful pieces of writing carefully crafted by our students at Park View. In the end, it was Madeleine in Year 7, Maggie in Year 8 and Alex in Year 9 who wowed the judges with their imaginative stories.

The judges stated that Madeleine’s story, a chilling tale about a young girl and a memorable bus journey, created tension and fear through her skilful employment of structural techniques. The reader felt as though they could almost feel and smell the interiors of the bus through her vivid description.

Maggie’s story was about a character’s treacherous journey through a desert having survived a devastating asteroid that struck planet earth. The panel believed it to establish an engaging and powerful voice while expertly capturing the solitary character’s final moments on earth.

Alex produced a gripping dystopian tale set in New York that focuses on a young man’s experience living in a world now taken over by robotic intelligence. Judges were blown away by his use of vocabulary and ability to immerse the reader into such a hostile environment.

On 30th April, myself and the competition winners travelled to Red Apple Creative Studios in the centre of London where we got the pleasure of watching actors, alongside a director and sound technician, bring their stories to life.

Madeleine, Maggie and Alex all had a go in the director’s chair and gave the actors artistic direction in telling their stories. They did not shy away in telling the actor to speak in a particular voice or place emphasis on a specific word. It was a pleasure to observe and admire!

We thoroughly enjoyed ourselves and found it fascinating seeing the workings behind turning a piece of writing into a piece of audio. It was an honour to get the opportunity to celebrate the talents of our Park View students.