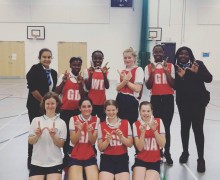 Park View came third in the borough at the recent U15 Table Tennis Tournament, with only a few points off finishing second place. This is a massive achievement as they held their own playing against some of the top ranked players in the country.

This term has been a really busy one for Netball with up to three fixtures a week. Our girls have been working extremely hard both at fixtures and at training. With the help of Ms Heath and Ms Rubinstein, the girls have been learning new skills each time they attend.

There has been some amazing performances from all the girls with some fantastic wins against teams in the local borough. A big congratulation to the following captains who have been helping their team get organised and prepared for all upcoming matches: Year 7 - Molly, Year 8 - Ava, Year 9 - Audelia and Year 10 - Maggie.
Football
Park View boys’ football has had a positive start to the season with every year group winning games. Our most successful team are the Year 8 boys who have won two out of three games, placing them third in their league.
Our Year 11 team went through to the second round of the Middlesex Cup after beating a very well drilled Highgate School team, going through on penalties. Unfortunately, they were knocked out in the second round after two  late goals from Highlands.
On Sunday 17th November, newly promoted Tottenham Women played Arsenal Women at the new Tottenham Hotspur Stadium – the reigning champions of the FA Women’s Super League.
We were so grateful to have been offered tickets by the home club, where members of our girls’ football team were able to attend alongside a few members of staff.
Everyone had a great afternoon and enjoyed the game with a 2-0 victory to the away team - Arsenal Women, after a close first half. Park View students contributed greatly to the atmosphere in the stands, with lots of shouting and waving flags.
Basketball
On Saturday 14th September, the PE department and Year 9 team took thirty pupils to the Copper Box Arena in Stratford Olympic Park to watch Celebrity Ball Out - a celebrity charity Basketball match.
The star-studded team line-up and celebrity coaches included: NOT3S, Ashley Walters, Rak-Su, EO, Richard Blackwood and Anthony Yarde with live music by BBC 1Xtra.
It was such an amazing afternoon, watching some great Basketball by the celebrities. One of the highlights from the trip was that pupils were able to watch their very own teacher Mr Oladimeji on the pitch as he was the main referee for the match.
Thank you to Mr Smart and Ms Brown for organising an incredible trip!
Share on: