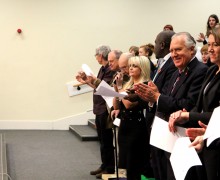 On November 2nd Park View held a spectacular award ceremony for a competition to design a memorial for Oliver Tambo, Nelson Mandela’s closest friend and Anti-Apartheid activist who lived in exile in Haringey.

There were also commendations for Year 7 students Ashley and Tansel, and Year 8 students Jack, Henry, Nickheel and Cruz. The winners shared a cash prize and along with the runners up, will be visiting the Houses of Parliament for a private tour with David Lammy MP.

There was a fantastic exhibition of many of the entries and some wonderful performances from Year 10 student Kristian - who played the South African national anthem and the KS3 drama club led by Ms Darnell, who dramatized Mandela’s funeral oration for Tambo, which was absolutely spectacular! The ceremony was followed by a delicious buffet meal, generously sponsored by our school caterers - Innovate, which rounded off an incredible day.

You can view all the photos taken during the event in the Image Gallery.